A mighty elephant once lived in a jungle. In the jungle, all the animals lived in harmony and loved each other.

One day, the elephant went for a walk to a nearby farm. There he saw another elephant which was not as mighty as him. But the farm animals treated him like a king.

While the farm elephant was resting, the donkeys brought him food, the ducks got him water, the rabbits massaged his legs and the birds sang for him.

Seeing the farm elephant getting a special treatment, the jungle elephant was jealous.

“I do not get this kind of respect in the jungle. It seems no one in the jungle is afraid of me,” he said to himself.

When he returned to the jungle, he went on a rampage. He uprooted trees and trampled upon the grass.

He got hold of a deer and hit him. A monkey was the next to get a beating from him.

As word spread in the jungle about the elephant’s anger, all the animals went into hiding.

Since that day, no one dared to go close to the elephant. He had started to believe he had earned the respect which the farm elephant received.

But the ants could take it no more. They conceived a plan to scare away the mighty elephant.

When the elephant was fast asleep, they brought a mix of dirt and chillies and put it close to his snout. The elephant inhaled the mix, causing him pain and unease.

He started running like a mad animal. Seeing him run here and there, the ants had a good laugh.

The elephant finally found a pond and filled his snout with water to clean it.

The elephant could not comprehend how such small creatures like ants could cause him harm.

“How could these little ants hurt me? How could they not respect me despite the fear I have created?” he thought.

The jungle elephant then walked to the farm once again, thinking he would join the farm elephant and be respected by all the animals.

Soon the animals finished their job. The farm elephant then decided to rest. The animals whom he had helped came running to comfort him.

The jungle elephant understood what had earned the farm elephant so much respect. He was ashamed of his behaviour and decided to return to the jungle to ask for forgiveness from all the animals. 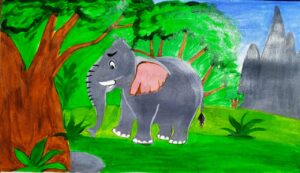