Once there lived an eagle in a valley. A dove, named Dovel, also lived there.

The dove had its nest on a tree, while the eagle lived high up on the hill. The eagle could fly high, but the dove could only manage short flights.

One day, there was strong wind blowing in the valley, and it soon turned into a storm, which destroyed trees.

The tree in which the dove lived lost its branches and the dove lost her nest. The dove was smashed to the ground, its right wing broken. It was not able to fly anymore.

The next morning, the eagle flew up to the dove.

“Look at you,” the eagle said with arrogance.

“You are a tiny bird. The storm has destroyed you and your home. I am strong and I live up on the hill. The storm could not harm me at all.”

The dove was hurt. Days passed, and the dove gave up. She decided to live with her broken wing. Steadily, she built a new home in a bush on the surface of the valley,  started living without even trying to fly. 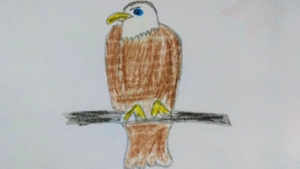 The eagle would come to her every day and mock at her inability to fly. But the dove kept quiet, trying not to mind the presence of the proud eagle.

Many months later, a hunter came to the valley with his hound and trapped the eagle as well as the dove.

The birds were put inside a cage watched by the hound.

Proud of its ability to fly, the eagle made desperate attempts to escape the cage, but failed. Seeing this, the hunter clipped his wings. The eagle lost his power of flight and was now helpless.

The eagle knew that the hunter would soon kill them both.

He said to the dove: “You never had a choice to escape, but now I, too, will die with you. I cannot fly.”

The dove replied: “I am used to living on the ground. I will save my life. My legs have become strong.”

The eagle understood that now he was one without any strength, because the wings he was proud of had been clipped.

When the hunter lifted the cage to have his birds, the dove ran as fast as it could and escaped. The eagle didn’t know how to turn, and was trapped.