Ana, an ant, lived on a hill by the river. Nat, her friend ant, also lived there. The two were young and energetic, enjoying each other’s company.

One fine morning, Ana and Nat were out in the field playing. Nat looked at the sky and saw cloud building up over the hill.

The cloud started getting thicker and thicker. And then, they turned darker.

Nat rushed home and started working on her shelter. She collected twigs one by one and strengthened her roof. She then collected food particles to store for the possible storm.

Ana found new mates to play with. She continued to have fun in the field, laughing at Nat for spending her time mending the house.

“You worry too much. Even if it rains, we will not have much trouble.”

When it didn’t rain in the evening, Ana laughed louder at Nat.

“I told you it will not rain,” she said. 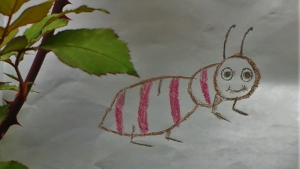 Ana’s house was weak. She hadn’t stored any food either for bad weather. But she didn’t care.

And then what Nat had feared, happened. There was a storm!

Ana’s weak house was not able to withstand the storm. The rain destroyed it, and winds broke the walls.

Ana was soon homeless in the middle of the storm. Battered and broken, she was looking for a shelter.

Nat’s house was unaffected. The storm had caused it no harm.

Ana knocked at her friend’s door, and Nat responded. She got Ana inside and gave her a blanket and food.

The storm finally passed and the sun came out in the morning. Nat made breakfast for the two of them.

“We all shall value time and prepare for a storm while we can,” Nat advised Ana.