In a vast grassland lived a rabbit named Raby. He had a deep burrow for shelter.

The food in the grassland was plenty not just for Raby but also for many others who could come there in search of it.

Adjacent to the grassland was a forest where lots of animals lived. To keep the animals away from his grassland, Raby had constructed a false story about the grassland. He used to lie to everyone that anyone stepping into the grassland or eating from it would turn into a rabbit as small as Raby and be vulnerable to predators.

Raby told them that he was once a mighty elephant who turned into a rabbit because he ate from the grassland.

Of course, no one wanted to turn into a rabbit. So, they believed in his story, and stayed away from the grassland.

Years passed, and the story became common tale in the jungle. Everyone knew about it, and no one dared to step into the grassland. And Raby selfishly enjoyed in the grassland.

Then one day, there was a fire in the jungle. It burnt down all trees, leaving the animals without any food.

Selfish Raby was happy to see that there was no one left to bother him. Untroubled, he ate his dinner and went to sleep. 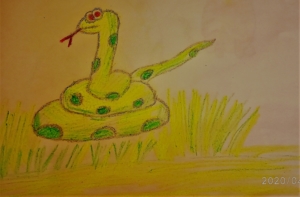 Suddenly, he heard a hiss. He went to enquire and saw a python crawling into his burrow. Raby was terrified. There was no way he was going to fight the python. He knew it was his last day.

The python had come from a far away jungle. Since, the animals who knew of Raby’s false story were gone, the python was not asked to stay away from the grassland.

Raby ran for his life towards the jungle. He saw mighty elephants preparing to leave for a better place.

“Please save me,” he pleaded. “A python is after me. You are mighty. You can easily trample him under your feet if you come with me.”

The elephants listened to him, but refused to help him.

“If we step into that grassland, we will become like you. We cannot help you,” said the eldest of the elephants who knew of Raby’s story.

Raby cried and cried. He told the elephants that he had been lying, but they didn’t believe him, because everyone in their jungle knew of the story.

They walked away, leaving Raby to face the python alone. The python came and ate Raby.