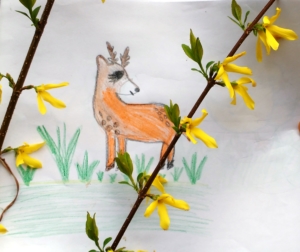 A young Deer lived in a thick forest. His home was under a tall tree, a stream flowed nearby.

The Deer was sad, because he lived alone. He had no friends to play with. There lived a herd of deer in the same forest, all of whose members played with each other from dawn to dusk. But they never allowed the young Deer to play, because they thought he was lean and ugly.

One day, the Deer decided to give it another try. When the herd came to play in the pasture by the stream, he walked up to them.

“Let me play with you. I am as good as anyone of you,” he told them.

The herd laughed at him in reply. Heartbroken, the Deer decided to leave the forest and go to some other place.

The next morning, when the sun rose, he started walking away from his home. He walked and walked, never looking back towards his home.

After walking for half a day, he was tired. He hadn’t eaten anything since morning.

The Deer decided to take some rest before walking further. He didn’t know where he was going; he just wanted to find himself a new home away from the herd.

He spotted a pond nearby with a lot of fruit trees around it. Hungry and thirsty, he ran towards the spot and drank from the pond. He picked up a fallen fruit from the ground and started tasting it. The Deer was happy, now.

He was ready to rest, but the presence of an old deer distracted him. The old deer was frail, helplessly lying on the ground, in pain. The young Deer walked up to him.

“What is troubling you, sir?” the young Deer asked.

The old deer was too weak to raise his head or open his eyes. He took time to reply.

“I was going home, but I got tired on the way. I want some water and food, but I am unable to go to the pond or eat from the trees,” he explained.

“I will help you,” the young Deer said.

He took an empty water-melon shell and brought water in it for the old deer. He also got him fruits to eat.

The old Deer had his fill and thanked the young Deer.

“Where were you going?” the old deer now asked.

“I am on my way to find a new place to live. I had stopped for rest when I saw you,” the young Deer said.

It was already evening, too late for the young Deer to reach anywhere. He decided to spend the night there.

The old deer regained his strength and was up on his legs.

He offered the young Deer to go with him to his home in the nearby forest.

The young Deer agreed, and both of them walked together to his home, where the old deer lived along with his herd.

The young Deer was surprised to see so many of his kind, thinking he would be thrown out like in the past. Instead, he was welcomed.

“You are a beautiful deer,” a member of the herd told him.

The young Deer was more surprised now, because he had never heard such praise before. “You have a kind heart. You saved our old deer. From now on, you are a part of our herd. This is your new home.”

The young Deer was happy. His kindness won him friends. He was not alone anymore.