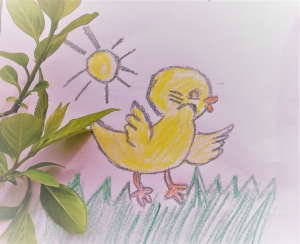 Once there lived a chick in a village. The Chick was small and weak, living in a flock comprised of his parents, uncles, aunts, and cousins.

Every day, all of them roamed around in search of food. They worked and ate together. The young ones were protected by the elders.

One day, one of his cousins rushed to their coop with a bad news. A fox had arrived in the village from the nearby jungle and he was hunting for food.

The news terrified the elders. They had never been trained to fight the foxes. And they knew their young ones would be the first ones to suffer the attacks.

That night, they could not eat anything. Everyone in the flock was apprehensive.

When they woke up the next morning, the worst had happened. They came to know that the fox attacked their nearby flock and killed all its members. They knew their number was next.

Thinking it was their last day, they didn’t go outside the coop. They stayed inside, huddled together for the one last time.

The Chick was feeling sad.

“How could this end so suddenly?” he asked his mother hen. 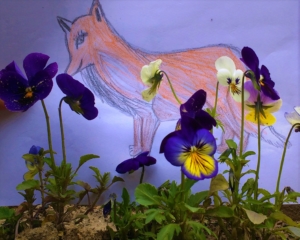 “We are too weak to fight a fox. We cannot save ourselves,” she told him. “Look at yourself. Do you think you stand a chance against a fox?”

The Chick was too young to understand that a fox could not be defeated by hens and cocks.

He said to his mother: “We may be weak, but we can be strong. We can die fighting, at least.”

The hen was surprised to hear the words of wisdom from her small chick. She felt emboldened, but she didn’t know what to do.

“What do you think we shall do?” she asked.

“Shall we face the fox when he comes to attack us?”

“I don’t know. But if we stay strong, we will find a way out,” he replied.

The chick thought of a plan. He asked his mother to gather all the members for a chat, and she did.

“I may be small and weak, but I am one of you” he began explaining.

Only two of his cousins followed him at first, but soon everyone joined, one by one. He asked half of his family to dig with their claws around the coop, a furrow deep enough to trap an adult fox.

The remaining half of the flock was sent to collect straw or twigs in their beaks. They hid the furrow with their collection.

As the dusk approached, the flock sent only two of its members inside the coop. The others waited outside in ambush.

The fox appeared in the dark and made its way towards the coop. But as soon as it stepped on the hidden furrow, it fell inside. The flock pounced upon the beast and hit him with their beaks and claws.

Bruised and hurt, the fox begged for mercy. He was rendered too weak to harm the flock. The Chick allowed him to go with a promise that he would never return.

The fox jumped out of the furrow and dashed into the jungle where he had come from.

The flock celebrated the victory and thanked the Chick for making them realise their strength.