A herd of sheep lived in a forest. There were all kinds of sheep in the herd: fat and lean; young and old; white and grey. And there were sheep with horns as well.

There also lived a pack of wolves adjacent to where the sheep lived.

The sheep were easy prey for the wolves, who often attacked the herd, usually at night.

The sheep, however, had come up with an effective way for safety. 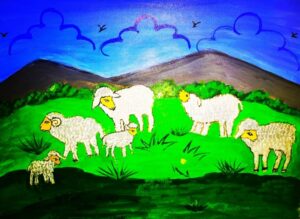 The sheep with horns were tasked with the security of the herd, and they mostly kept the wolves away.

But the life was easy neither for the wolves nor for the sheep.

Every now and then, the wolves’ attempt to hunt succeeded. And the other times, one or the other member of the pack would get injured at the horns of the defending sheep.

Tired from all the attacking and defending, the elders among the sheep and wolves called a meeting to think of a solution.

They decided to call a truce between the neighbours. As per their agreement, the wolves and sheep would not step into each other’s territory or attack each other.

“Although this is not natural, we as neighbours must stick to this agreement for our prosperity,” declared the elders.

The truce took effect. The wolves stopped attacking. The sheep gave up defending.

One day, many months later, a wolf felt thirsty. The only source of water close to the wolf was inside the sheep’s territory.

Seeing no one around, the wolf tiptoed to the stream and quenched his thirst.

Another day, the sun was shining brightly over the forest. A wolf needed some shade, which was only available under a huge tree in the sheep’s territory.

Seeing no one around, the wolf took a nap in the shade, and returned.

There was a wicked wolf in the pack, who had seen the two wolves breach the agreement.

One summer day, the wicked wolf got hungry.

He spotted a defenceless lamb in the sheep’s territory.

The wolf jumped at the opportunity and attacked the lamb. But the lamb raised a cry, alarming the sheep, who attacked and injured the wolf. Both the lamb and the wolf were left wounded.

All the wolves and the sheep gathered at the spot. Everyone was shocked at the breach of the agreement.

The elders from both sides convened a meeting to look at the matter.

The wicked wolf was asked to explain his actions.

“I am not the only one guilty,” said the wolf, with confidence.

“There have been breaches earlier. There are wolves who drank from the sheep’s stream and rested in their shade. You cannot blame me.”

The elderly, and everyone around, was shocked, as were the two wolves who had breached the agreement before. They had thought no one knew about them.

There was a hue and cry. Sheep and wolves debated in favour of the wicked wolf and against him.

“Quiet, everyone,” shouted the oldest wolf, who was respected by everyone.

“One wrong cannot be justified by other wrongs committed earlier. What is wrong is wrong.  The wolf who attacked the lamb is wrong, so are the two who stepped into the sheep’s territory before him. And all will be punished.”

The wolves were thus driven out of the forest.

The agreement was restored, so was the peace between the neighbours.