A lion with a black mane lived in a jungle which was home to all kinds of animals. He was the king of the jungle.

One day, a lion with a brown mane came to the jungle. He was strong and young. He claimed to be the new king of the jungle and went around threatening everyone. 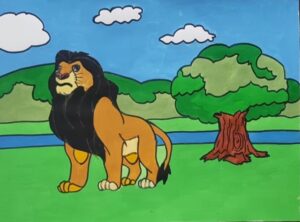 The animals liked their king but they did not know what to tell the intruder.

To solve the problem, a meeting of all the animals was finally called and the matter was put before the wise, old chimpanzee.

“There can be only one king and the strongest among the two lions will be the king of the jungle,” said the chimpanzee. “We must organize a fight between the lions and the strongest of the two, will be our king.”

The day of the competition was decided. All the animals gathered at the venue. The two lions could be seen at the centre, ready to compete.

The chimpanzee was also among the audience. He had to judge the competition.

When the fight began, both lions proved equally strong. None of them was able to overpower the other.

The roar of the lions and the cheer of the audience reverberated at the venue.

When all eyes were on the lions, an innocent lamb broke away from his mother all of a sudden and ran straight into the arena.

He was sure to get trampled upon, but the lion with the black mane spotted him running towards them. He immediately turned his back towards the brown lion and stopped the lamb right in his tracks. The lion then helped the lamb run back to his mother.

The brown lion at once grabbed the opportunity. As the black lion was busy saving the innocent lamb, the brown lion attacked him from behind and overpowered him.

The black lion fell to the ground, defeated.

As the moment to announce the winner came, the chimpanzee stood up, facing the audience. Both contenders were by his side.

He said: “We have witnessed a fierce battle for kingship and I need not say who has won the fight.”

“The brown lion has only won the fight. He has not proven to be the strongest among the two.”

Everyone, including the lions, was taken aback by what the chimpanzee had said.

On hearing this, the brown lion questioned the judgment.

The chimpanzee said: “It is not the physical power alone that determines one’s strength, but true strength is choosing to be kind even when it is most difficult. The black lion demonstrated his strength by saving the innocent lamb without caring for his loss.”

The chimpanzee declared the black lion as the king. The whole jungle erupted in joy.

The king was hailed and the brown lion forced to leave the jungle. He had understood that it takes more than physical strength to become the king.