Once upon a time, a bee flew into a garden in search of nectar. In one corner of the garden, she found a beautiful orange flower on a thick branch of a lush green plant.

The flower was in full bloom and full of nectar. Without wasting much time, the bee got inside. But as soon as she was inside the flower, its petals closed around her and she was trapped. The bee did not know it was an insectivorous plant. 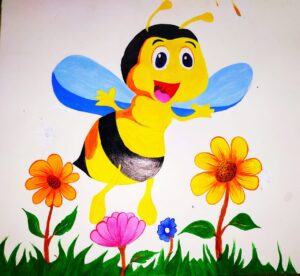 She tried desperately to free herself, but failed.

She had not landed on any such flower before, so she could not understand what had happened to her this time. Then, the plant spoke to her.

“I only look beautiful so that I can trap stupid creatures like you. You are my lunch for today,” said the plant. 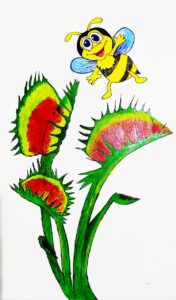 The bee was terrified, as she was not strong enough to free herself. But somehow she gathered courage and spoke to the plant.

“Do you know what honey is?” she asked the plant.

The plant had never heard of it.

Not waiting for the plant’s reply, the bee continued, “It is what we bees produce from the nectar collected from flowers.”

“Humans think it is the sweetest thing in the world. They risk their lives to collect the honey we produce. Oh, you must taste it once,” the bee told the plant.

The description of honey tempted the plant.

The bee didn’t wait for the plant to respond.

She continued: “It is said to cure disease and increase life. It makes everything taste better. It is sweeter than anything you might have ever tasted. It is so soft that it disappears in mouth; only the sweetness remains.”

The plant was tempted and could no longer hide its curiosity.

“Where can I get this honey?” it asked.

The bee explained to the plant how her colony produced loads of it from the nectar collected every day.

“If this wasn’t my last day, I would get you some. But my life is going to end soon,” the bee said.

The plant gave in to the temptation and decided to let the bee go.

“Alright, I will spare your life if you get me some honey,” the plant said.

The bee knew that her trick had worked.

She said: “I am so thankful to you. Let me go and bring some honey for you to taste.”

The plant unclasped its petals.

The bee was out in a jiffy.

When she was finally free, she told the flower, “Do you really think I am going to return and bring you honey?

“You were stupid to let me go. You shall never taste the honey, which is produced only from the nectar of the sweetest flowers.”

The plant understood that the smart bee had tricked it. It regretted its stupidity, but it was too late.