A large herd of wildebeests was migrating across the country looking for lush pastures. As it was the middle of the autumn, the group of wildebeests, young and old, male and female, tall and small, was walking during the days and nights so as to cover the long journey before the winter would set in.

A young brown wildebeest, which was part of the herd, was excited as it was his first seasonal migration. But he was unaware of the dangers or challenges ahead.

After covering several miles, the leader of the herd called for a stop in a grassland by a stream.

“Let everyone rest for the night. We have a long journey ahead of us,” he announced.

As they stopped, everyone ate their fill, drank from the stream and then went to rest. But the brown wildebeest had other plans.

When everyone had fallen asleep, the brown wildebeest thought it was time to have some fun. As it was the middle of the night, he slowly made his way past the sleeping members of the herd until he was out of sight. Then he ran and in no time, the brown wildebeest was in the farthest corner of the grassland. He loved being alone under the stars and soon forgot that he had left the herd far behind. By the time he decided to return, the sun was out. 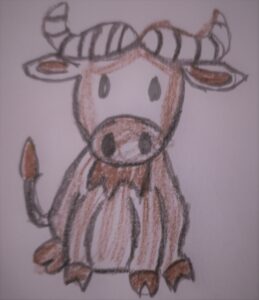 When he reached the spot, where the herd had stopped to take rest, he found they had left, leaving him behind.

The brown wildebeest was now afraid. The place was home to lions and other wild animals and he thought he could be an easy target as he was alone. The journey ahead was equally dangerous and the wildebeest had no idea about the track or the trick. He hadn’t heard of anyone covering the long distance alone.

Yet, he refused to give up, and set off alone.

“I can make it if I stay strong and believe in myself,” he said to himself.

The wildebeest followed the footsteps of the herd. After covering a few miles, he reached near a river, which was full of crocodiles. They were waiting to pounce on the weak and the lonely wildebeests crossing the river. They had already hunted down many of them.

He had to cross the river to get to the other side as there was no other way. But with so many crocodiles, it would have been impossible to cross the river and come out alive. So, he thought of a plan. He waited for the crocodiles to eat their kill and come ashore to digest the food. When he was sure that they were too lazy to move and chase him in the water, he went to the shallow part of the river, farther away from the crocodiles, and crossed over.

By the time he was on the other of the river, darkness had enveloped the thick forest. As it was dark, the wildebeest lost sight of the footprints of the herd.

He was afraid and had no idea which way to go.

Lost in thought and worried about what to do next, a voice from somewhere above instantly caught his attention. It said: “I can show you the way.”

When he looked up, he saw an owl perched on a tree branch. The owl was ready to help him but demanded help in return.

“Here lives a lizard who steals my eggs. Help me get rid of it and I shall help you find the way,” said the owl.

“Okay, take me to the lizard,” the wildebeest said.

Off they went to meet the yellow lizard. When the wildebeest met the lizard, he warned him and said, “This owl is my friend. Do not steal his eggs or I shall bring my herd through this forest and have you and your kind trampled under our hooves.”

The lizard had never seen a wildebeest so courageous and knew they could be trampled if the herd entered the forest. So, he had to give in after the warning.

The lizard agreed not to steal the owl’s eggs. The owl was happy on getting an assurance from the lizard. The owl then, as promised, showed the wildebeest the way.

“But be warned,” the owl said. “There lives a lion on your route.”

The wildebeest had walked straight into the lion’s territory and the moonlight formed a large shadow of his body.

The lion couldn’t understand what was coming towards him. And, when he guessed it was a wildebeest, his experience betrayed him.

“No wildebeest can walk straight into a lion,” the king of the jungle thought.

He thought it wise to step back and let the animal pass.

The brown wildebeest ran very fast and rested only when he was sure that he was out of harm’s way.

When he woke up in the morning, the herd was in front of him. He had made it and they made him their leader.