An old wolf lived on a beautiful hillock. He was the oldest in the pack he commanded.

It was a perfect home for all of them. Thick vegetation covered the hillock. At sunrises and sunsets, the land was a sight to behold. 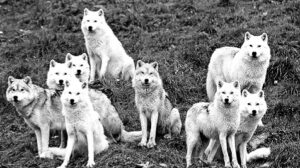 The wolves loved their hillock so much that the thought of going to some other place had never crossed their mind.

There was nothing to worry about, until a severe drought hit one summer.

The ponds and streams dried up. Animals living on the hillock started migrating to greener areas for food.

The wolves didn’t know what to do in such circumstances.

Migrating would mean they would have to give up their home, but staying could mean starving.

The pack was upset.

Everyone was waiting for the things to improve, but it kept getting worse with each passing day.

Food was getting scarce. 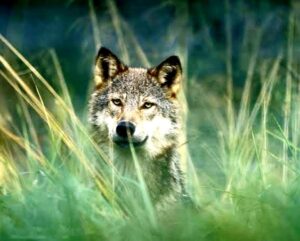 Then, a meeting of the wolves was called to discuss the problem.

Everyone attended the meeting, but the problem of food shortage could not be solved; no one knew how to make food available for the pack.

They turned to their leader for a solution, but the oldest wolf also didn’t have a clue.

The meeting ended in disappointment and the wolves dispersed. Considering himself not an able leader, the old wolf left the hillock and walked to a far-off jungle, where he could be in isolation.

After walking a long distance, the old wolf felt thirsty and hungry. He saw a coconut shell which contained some water, but as he tried to quench his thirst, a monkey stopped him.

“I own the coconut tree from which the shell has fallen. You cannot drink this water unless you give me something in exchange for it,” said the monkey.

The old wolf owned nothing except for a few nuts. Although he was hungry, he decided to exchange the nuts for the water.

The wolf quenched his thirst and carried with him whatever was left in the coconut shell.

When the wolf had covered several miles, he felt hungry.

He saw a fig tree and thought of eating some figs.

Before he could eat some, an owl, who owned the tree, stopped him, asking for something in exchange for the fruit.

The old wolf instantly gave him his water and took the fruits.

Tired of walking, the old wolf stopped to take rest, but all the while he kept thinking of his home and the drought. While he was taking rest, something crossed his mind. He had suddenly found an answer to the problem at home.

He immediately rushed home and called another meeting of the wolves.

The wolves understood that they cannot always have both things at a time.

They gladly gave up their hillock to find another place where there was enough food for all of them.