Abdul, a blacksmith, lived in a far-off village with his wife and two kids.

Every day, Abdul worked at his shop to produce iron tools, which he then sold in the market.

He would produce a single iron tool a day and sell it. But what he earned daily was never enough to feed his family. As a result, his family always went to sleep without having a proper meal. 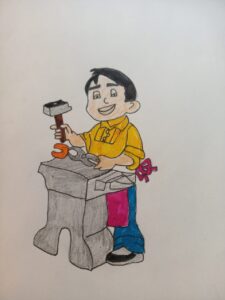 The blacksmith prayed for a miracle, which could increase his income and allow him to feed his family properly.

One day, when he was riding a horse to the market, he came across a tired stranger, who asked him for water. 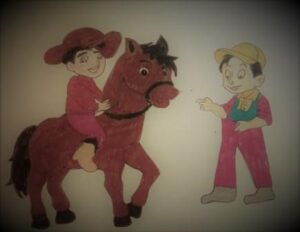 Without thinking much, Abdul untied his water can and gave it to the stranger.

“How can I pay you for this kindness?” asked the stranger, who was short in height and had a long, grey beard.

“I don’t want you to pay me for this. But you seem to be a learned man,” Abdul replied.

Thinking him to be a learned man, he sought help from the stranger.

“Can you tell me of a way by which I can double my income so that I can feed my family properly?”

The stranger gave Abdul a smile and also the answer he wanted.

“What you earn from the day’s work, you shall give that money to me. I will double the money and return it to you the next day,” the stranger told Abdul.

The stranger told the blacksmith that he would be waiting for him at the same place the next day.

He quickly added: “But if you don’t see me here tomorrow or the day after, keep the money with you till you find me. Do not spend the money or you will lose the fortune.”

Abdul was glad. He had finally found a way to get rid of his miseries.

When he reached home, he narrated the whole story to his wife. On hearing that better days were near, the blacksmith’s wife was happy, but at the same time she seemed a little worried.

“But if you give him the day’s earning tomorrow, what are we going to eat?” she asked.

As food was always Abdul’s main concern, the question made him think.

He decided to start off early the next morning so that he could produce two iron tools in a single day instead of one, and give the profit earned from the extra tool to the stranger.

Off he went early next morning to work. When he was ready with the tools, he went to the market to sell them. Then he went to meet the stranger as already decided, but did not find him there.

Not seeing the stranger, Abdul left the place but decided to keep the money safe, as asked by the stranger.

Days passed but he kept waiting for the stranger to double his money.

One day, the stranger showed up.

“Where have you been? I waited for you all these days. I have kept the money safe,” Abdul told him.

“You never needed me,” said the stranger.

He told Abdul that the money he had kept safe was all that he needed.

“You don’t realise that you have already doubled your income. I did not do it for you. You did it for yourself with your efforts. You never needed me.”

Abdul understood what he had done. He had finally made enough money to feed his family properly. They didn’t have to go to sleep empty stomach anymore.