Ali was greying with age and hard work. He owned a small apple orchard where he worked from morning till dusk, everyday, watering the trees, plucking the rotting fruits, and tending to the boughs and the branches. 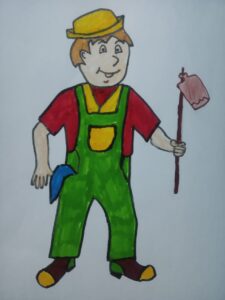 He used to sell the fruit in the market to make his living. Every season, a lot of the apples would rot while still on the trees, and require Ali to discard it to save the remaining of his crop.

When Ali came to the field one day, the parrot told him, sarcastically, “Our lives are so different. You have to work very hard to make your living, while I get to live an easy life due to the efforts you make.” 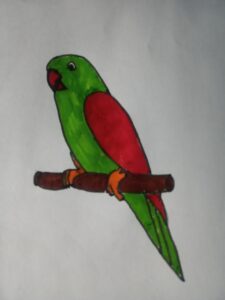 The parrot was feeling proud. He thought there was no one better than him.

“I am sure my life is as easy as it can get,” he said to himself.

“You are right,” he replied.

“I work hard to pluck the rotten fruits, and you consume them without making any effort. Yet, I am happy with myself. I can achieve anything with my hard work, while you have become too lazy to do anything. There will be a day when you will regret this.”

The bird ignored Ali’s words, and returned to his nest up on a tree to relax.

Soon, the parrot grew used to the easy availability of food. All he had to do was to step outside his nest and eat the rotten apples. He had no need to leave the orchard, and he never did.

Time passed and Ali continued to work on his orchard. With his hard work, the health of his orchard got better.

The number of rotten apples was growing less and less. And one day, he succeeded in having not a single rotten apple in his orchard; all the apples his orchard produced were healthy and fit to be sold in the market.

When the parrot woke up from his slumber to get his food, there was nothing outside his nest. He was surprised, yet not alarmed.

Days passed into weeks, and Ali didn’t come to the orchard, for there was less work for him to do now.

There was no food for the parrot.

Starving, the parrot thought it should pluck good apples from trees to feed himself, but he had forgotten how to do that. He was used to easy living.

Finally, he thought of leaving the orchard and going to some place better. But years of no flight had rusted his wings: the parrot could no longer fly.

The bird gave up. With little energy left in him, he fell on to the ground.

Ali saw him when he returned to the field, and gave him an apple to eat.

“My hard work has eased my life, but your laziness is now troubling you,” Ali said to the parrot.

The parrot was sorry about what he had done to himself. He learned his lesson.

As soon as he regained his strength, the parrot worked hard to relearn flying and how to search for food.

His hard work helped him saved his life.