The winter had given way to spring in the valley.

The sun was out.

There air was fresh and cold.

Sam and Hamid took their bat and ball to play cricket in the field close to their home by the lake. That is how they wanted to spend their Sunday.

In a nursery nearby, people had gathered to buy fresh saplings to decorate their lawns with.  There was much to buy. Blooming flowers in pots. Saplings in bunches. So much around.  So colourful.

Sam took the stance before the stone wall. Hamid stood 22 yards away to bowl. 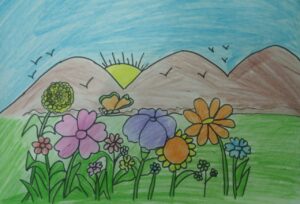 Hamid bowled, and Sam swung his bat to hit the ball right into the nursery.

Hamid went running to fetch the ball, which stood inside a pot next to the torn flower blue and white in colour.

Hamid lifted the flower in his hand, not knowing what to do with it.

Mrs Rihana was silently watching him.

“You need help with that?” she asked.

“Can this be fixed?” asked Hamid.

Hamid handed her the flower. It was so delicate.

Mrs Rihana dug a tiny hole near the base of the sapling. She placed the flower in the hole, making it look like it was still attached to the weak stem.

She handed him his ball.

Hamid ran with it to Sam and they resumed playing.

Mrs Rihana passed by in her car full of saplings and pots. She waved at Hamid. Hamid waved back.