Deep in the Himalayas, there was a small village, an abode to people who were unknown to trickery and wars.

They were artists and artisans, who hadn’t seen much of the outside world.

A wicked thief came to the village once, and, sensing the villagers’ lack of knowledge, spread a lie: “A monster that destroyed the towns and cities is coming to the Himalayas. The monster knocks at the door in the middle of the night and engulfs anyone who cannot escape.”

As soon as the villagers believed the story, the thief began his act. 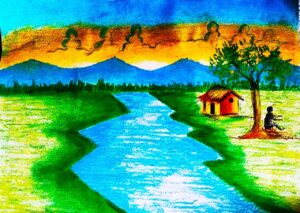 He went knocking at the doors every night, sending the inhabitants running for life, believing it was the monster.

And the thief easily looted everything they owned.

This continued for many weeks. The lie about the monster became stronger and stronger.

There was an old house in the village in which a lived a young man.

The villagers thought him eccentric, who spent his time studying books and learning strange things.

The man was rarely seen outside, but he always knew everything that was happening in the village.

He bolted his doors tight as if to guard a treasure lying inside.

After many successful nights, the thief cast his eyes on the young man’s house.

“I must have his treasure,” he thought.

“And he is just an eccentric man. It shall be very easy for me to do my trick on him.”

As the night grew dark, the thief went to the house and knocked at the door.

He waited several minutes to make sure the young man had run away.

As the thief opened the door, the young man attacked him with his axe.

The thief fell on the floor, unconscious.

The villagers thought it was the monster’s doing.

But as they came out in the morning, they found out the truth about the thief.

“I spend my time learning things. So, I knew there could never be a monster. And my knowledge has saved our village,” said the young man.